Recently we delivered a project for a US big data analytics and visualization company. A part of the project employed so called Arnold’s cat map. Since Arnold’s cat map is a very interesting mathematical procedure with a large number of potential of applicability, we’d like to introduce it to the image processing and machine vision community.

In general, Arnold’s cat map is a chaotic map from the torus into itself. It is named after Vladimir Arnold, who demonstrated its effects in the 1960s using an image of a cat (see below). 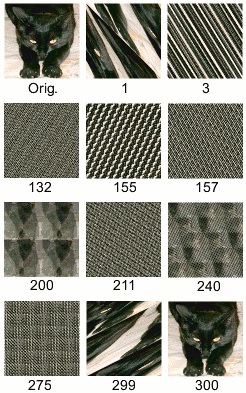 Without going into mathematical details, in this example, we see that after 300 iterations we are arriving at the original image. It is possible to define a discrete analogue of the cat map. One of this map’s features is that image being apparently randomized by the transformation but returning to its original state after a number of steps.